Just added to your cart

Store All Your Shower Products Easily With These Sturdy, Dependable Shower Caddies

If you’re always up to date on the latest hair care technology and love indulging in the latest tea tree oil shampoo or leave-in conditioner, you’ve probably acquired quite the shower supplies collection. All those bottles can get overwhelming and clutter up space in your shower. Plus, things can get slippery in there and one rogue bottle can leave you injured on the floor if you’re not careful. Instead of risking it, invest in a shower caddy to keep things organized instead.

There are many different kinds of shower caddies. They all perform the same function of holding your shampoo, conditioner and body wash but where and how they do it depends on your needs and your particular shower.

Some shower caddies hang over the shower head itself or the shower door, others adhere to walls and some use tension poles to stand in a corner with multiple shelves.

Shower caddies tend to be made from metal or plastic. The majority of the larger shower caddy options tend to be metal, but smaller options like shelves are frequently made of plastic. Of course most metals will eventually corrode due to water exposure, so stainless steel shower caddies will be best for durability. Shower caddies made from other metals will still hold up for years to come and will almost certainly still deliver value in the form of shower space-saving and organization.

So if you’re finding yourself tripping over bottles or knocking your shampoo out from the shower’s tiny built-in shelf when you’re grabbing your conditioner then you might want to check out some of the best shower caddies below. Whatever your shower situation, we think you’ll find the best shower caddy for your needs.

This shower caddy from Zenna Home attaches via suspension pole that creates tension between the ceiling and the floor that holds it in place. This type of shower caddy is great since it works in almost all showers and requires little to no effort to install. It’s got four large shelves for all your goods and is rust-resistant as well. It’s fully adjustable and the assembly is tool-free. The shelves are adjustable and the end caps of the pole are designed to cause no damage. It also has a built-in towel bar on one of the shelves for convenience. 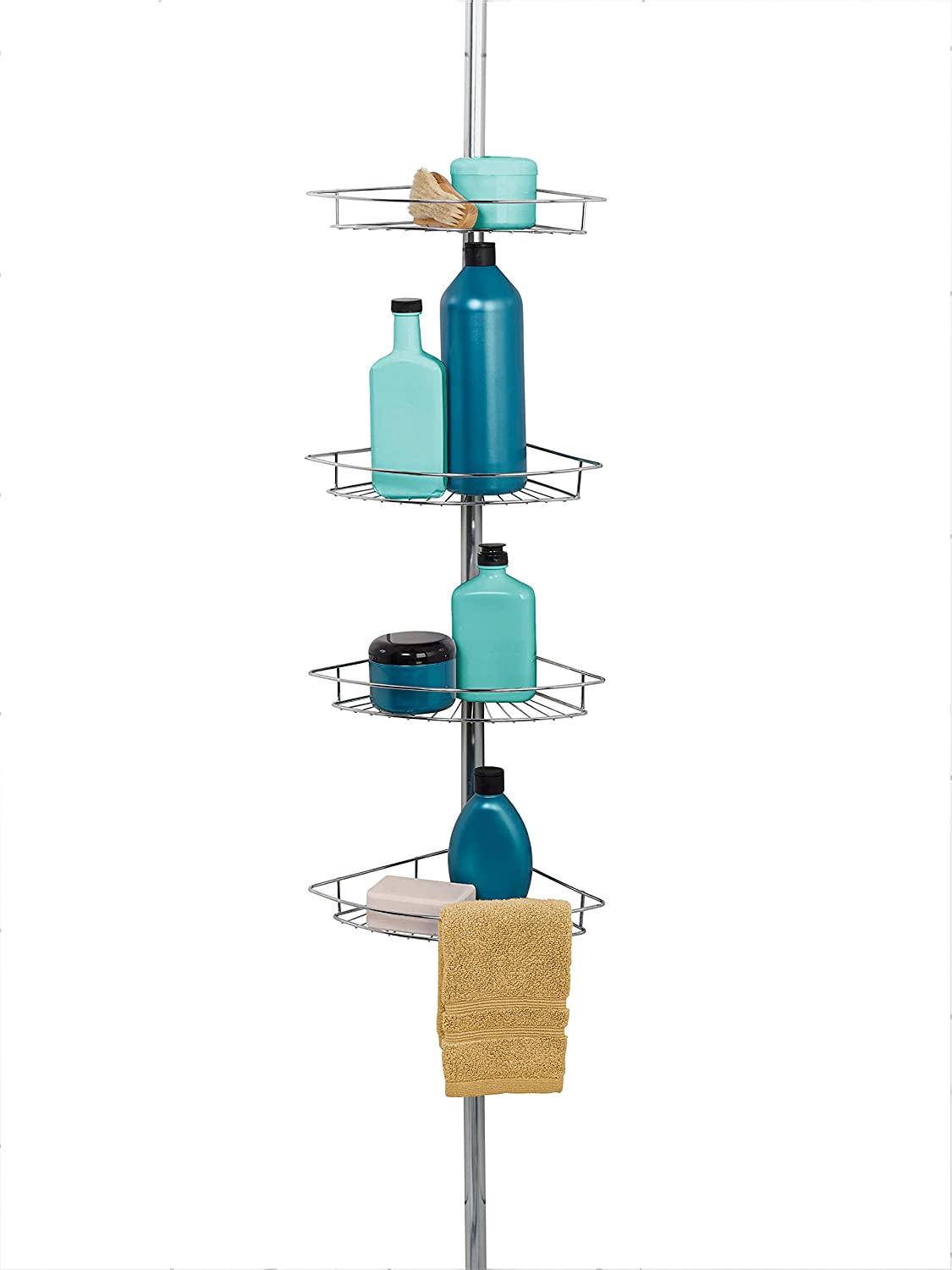 The Vailge Constant Tension Corner Shower Caddy will dutifully stand in the shower corner, where people never go, and hold as many baskets of products as space permits. It ships with five baskets, which are also adjustable on the pole so you can move them up or down to accommodate bigger bottles as needed. This caddy should also last you longer than others because it’s made from stainless steel and the pole uses strong tension springs to stay in place. There is some light assembly required, but you could easily have your tension pole shower caddy up and running in five minutes. If space and basket expansion are what you’re looking for, the Vailge shower caddy is the best shower caddy for you. 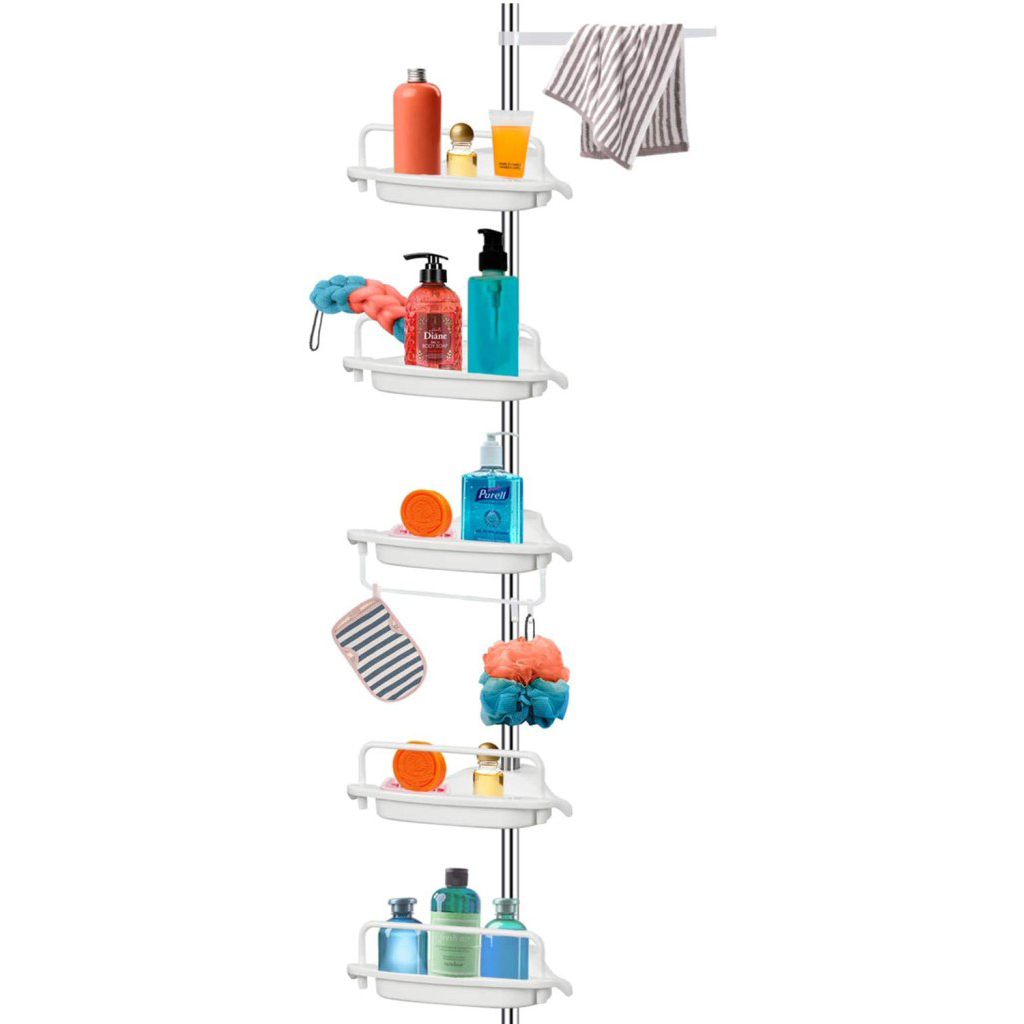 If you have a flat area of your shower, you might consider using a corner shower caddy. Corner shower caddies stand on the shower floor, so they’re lower to the ground and very stable in a decent corner. That makes them super useful for people with chairs in their showers or for storing shower products for kids.

The Tenby Living Corner Shower Caddy has all those basics and a few simple features that make it a standout corner shower caddy.

It’s made from plastic and designed to be resistant to mold and mildew. The three baskets are sizable and can handle multiple big bottles each, and the package includes spacers to adjust the distances between baskets. If you have more vertical space, you can also buy this same caddy with four baskets instead of three.

A corner shower caddy is a great sturdy option to handle your extra products whether it’s in your bathroom or the shower itself. If you have the space or need the low height of the baskets, the Tenby Living Corner Shower Caddy is probably the best shower caddy for you. 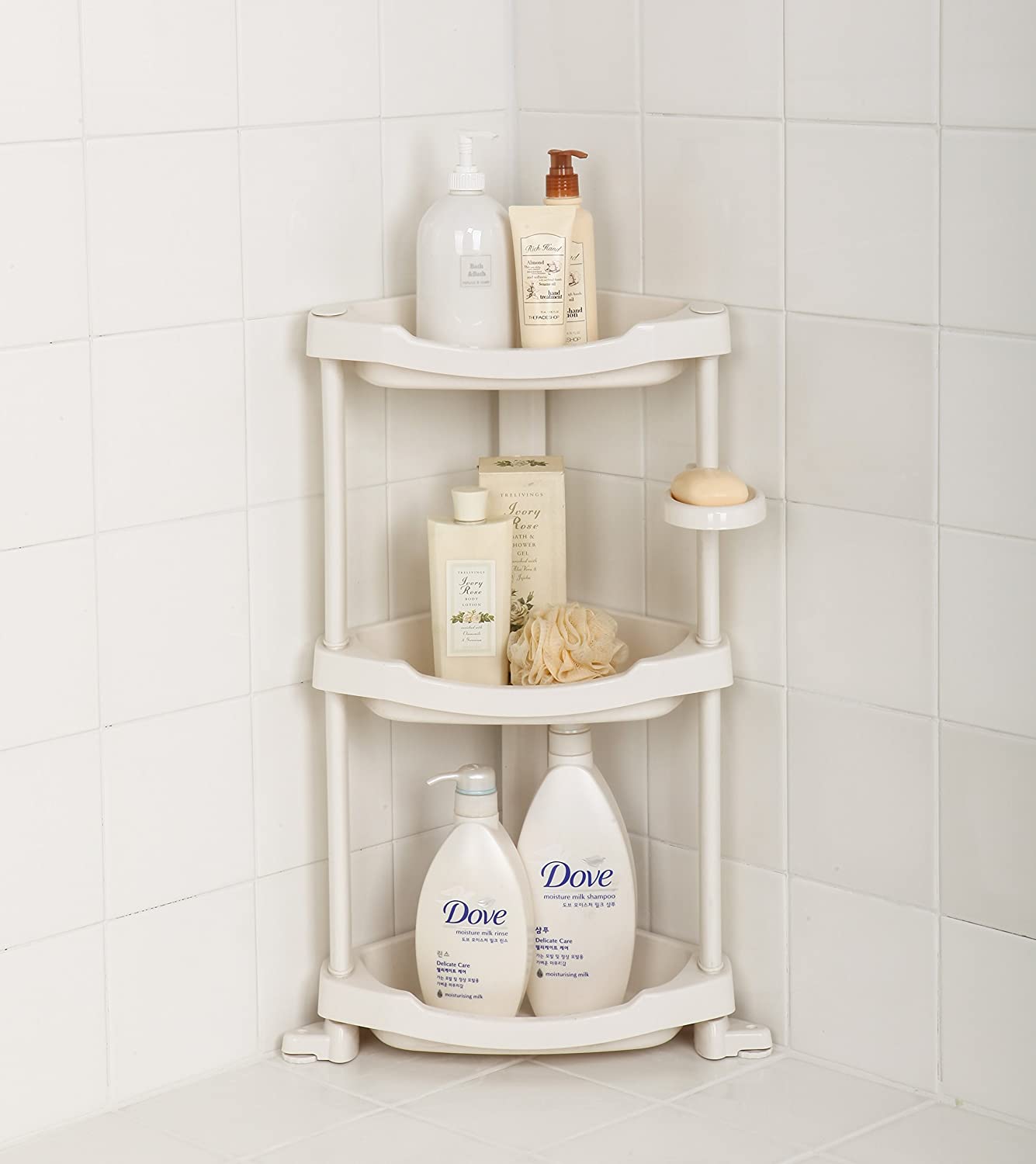 This shower caddy from Flowmist is self-adhesive, so it requires no drilling to install, and is made of rustproof aluminum material that’s designed to not break down over time. It comes with strong adhesive that’s easy to install and will keep the shelf stable, and it’s got a vented design that drains water quickly so your bathroom products stay dry and free of mold or other bacteria. 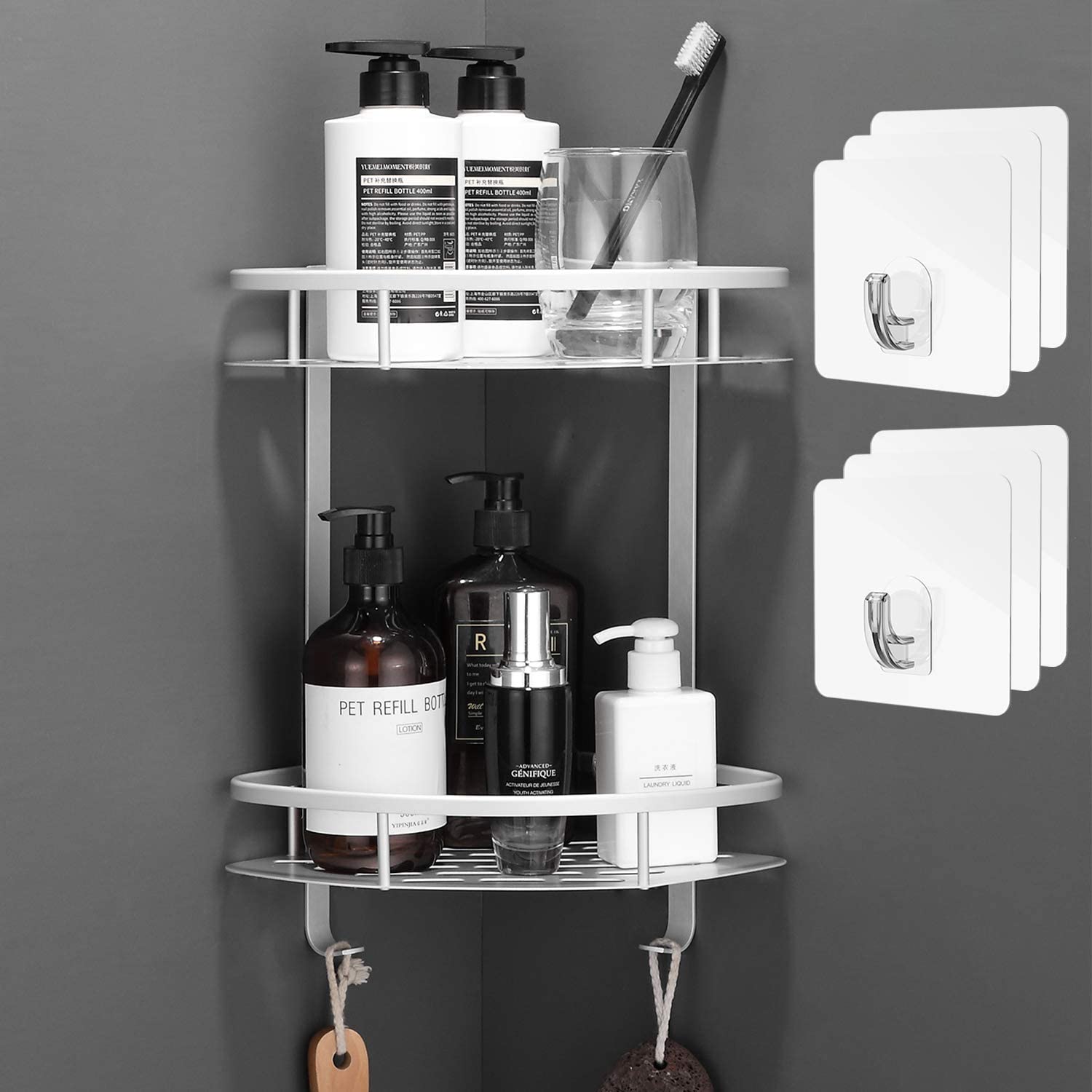 This shower caddy from ADOVEL attaches via suspension pole and has a ton of room on it between four large shelves, and five towel racks. The shelves are removable and adjustable so you can tailor the layout to your liking, and it installs easily in bathrooms with the proper height with no tools needed. The trays and pole are made of high-quality ABS plastic and have a weight capacity of a little over 11 lbs each. This is a sturdy, strong shelf that’s perfect for families or large households where many people share the same bathroom. 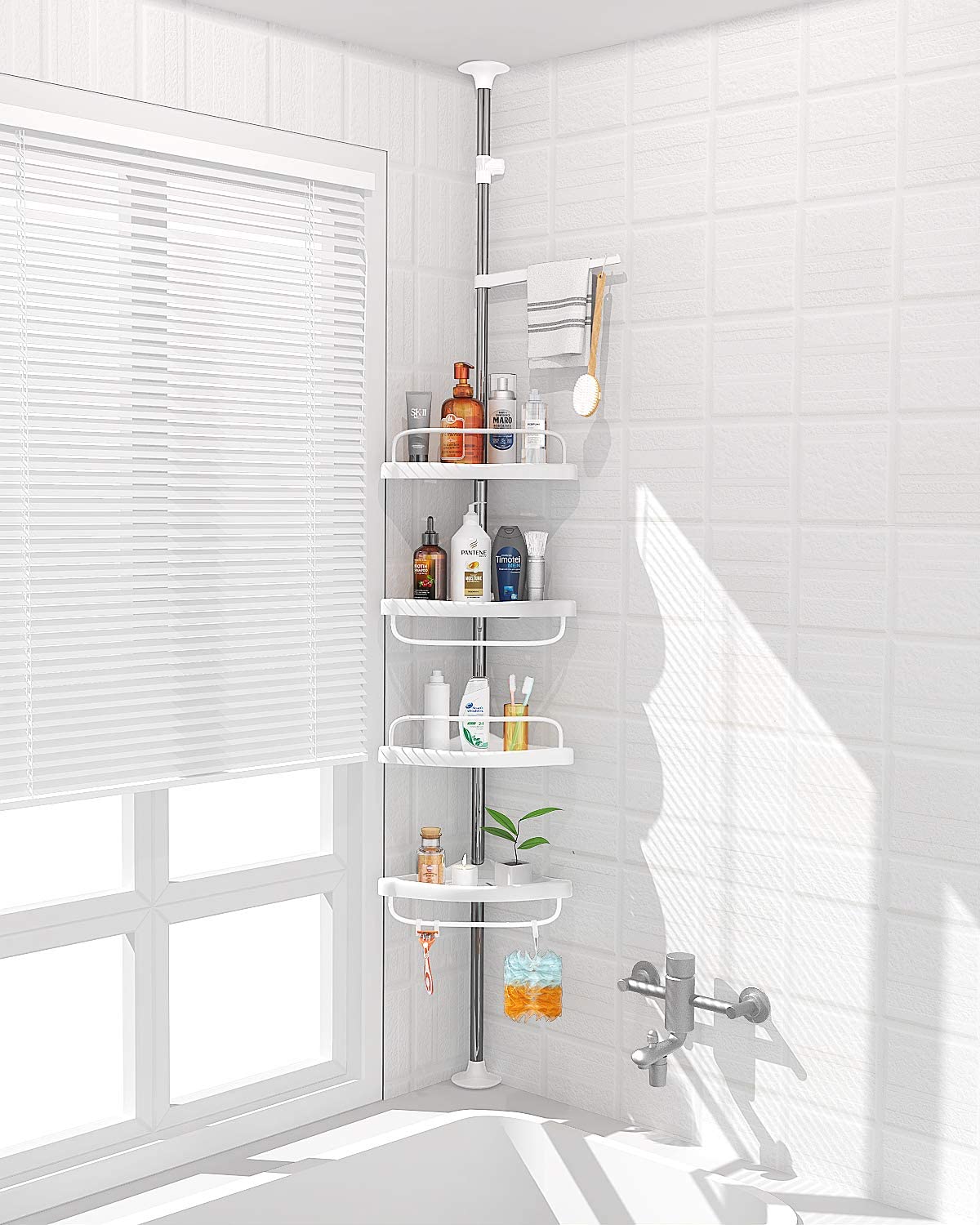 The Kincmax Shower Caddy Bathroom Shelf will make a cool, convenient addition to nearly any shower.

This set includes two shower caddy shelves that use an adhesive to stick and hook on to the wall, no tools necessary. The rails on the shelves are nice and tall too so you’re less likely to accidentally knock something out no matter where on the wall you put the shelves.

Fortunately the shower caddies are made of stainless steel so they should shouldn’t rust and should last for a long time.

We do wish they were rated to hold more weight since they only hold up to 15 pounds, but they’re not meant to be bulky and imposing and they will help give you some additional shelf space regardless.

Overall, if you want some good shower caddy shelves to stick wherever is convenient, then the Kincmax caddies are the best shower caddy for you. 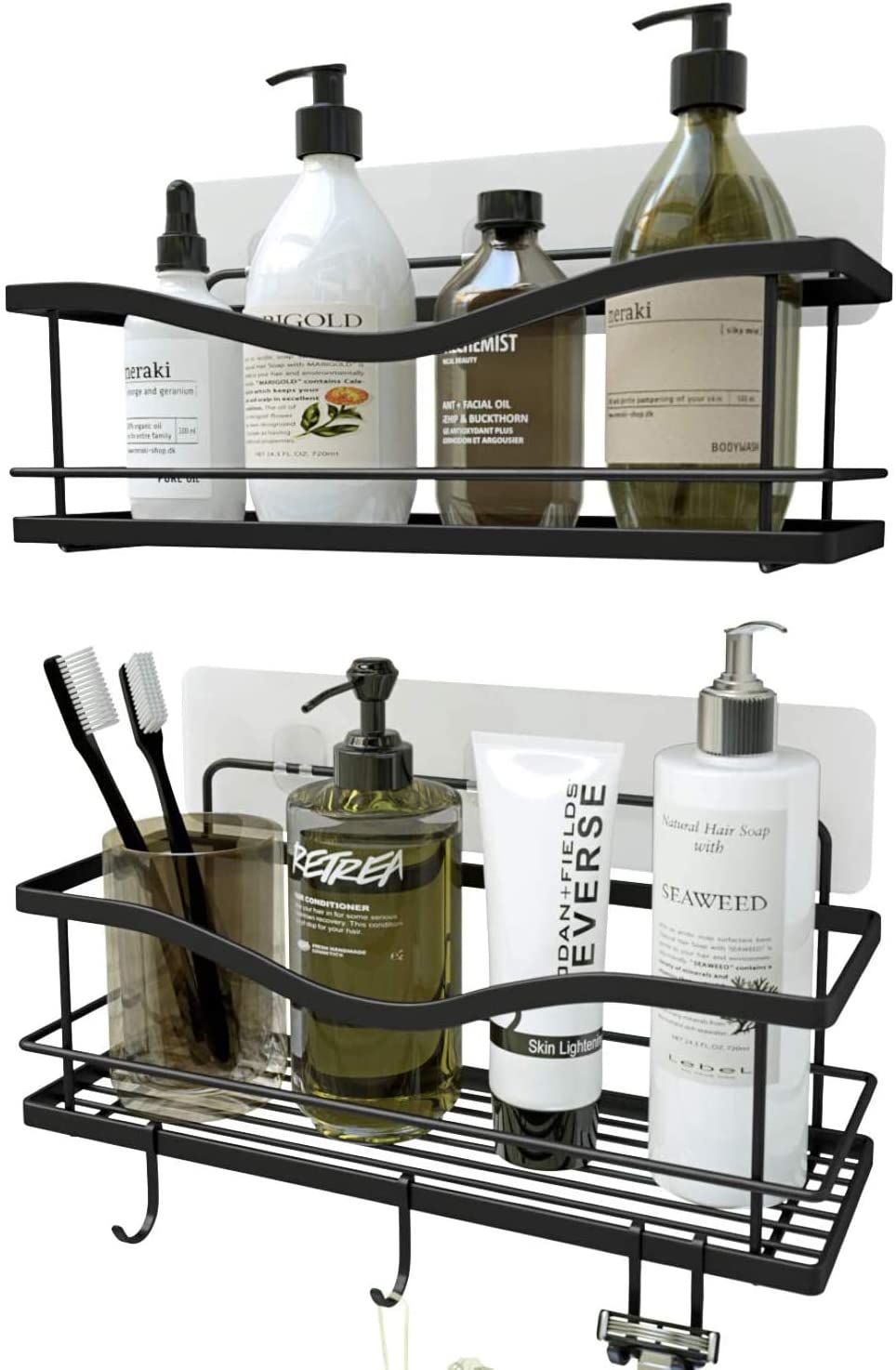 What if we told you that the shower caddy with the most unique and modern design was also one of the most affordable? If we told you the product came from AmazonBasics, you probably wouldn’t be too surprised.

If you’re looking for the best shower caddies but want something that isn’t completely made of ugly plastic, then check out this elegant option from the online retailer. Interlocking loops of metal frame this shower caddy, which is designed to hang from the showerhead. It doesn’t have as much storage space as some of the other options, but it does have a great design and price. 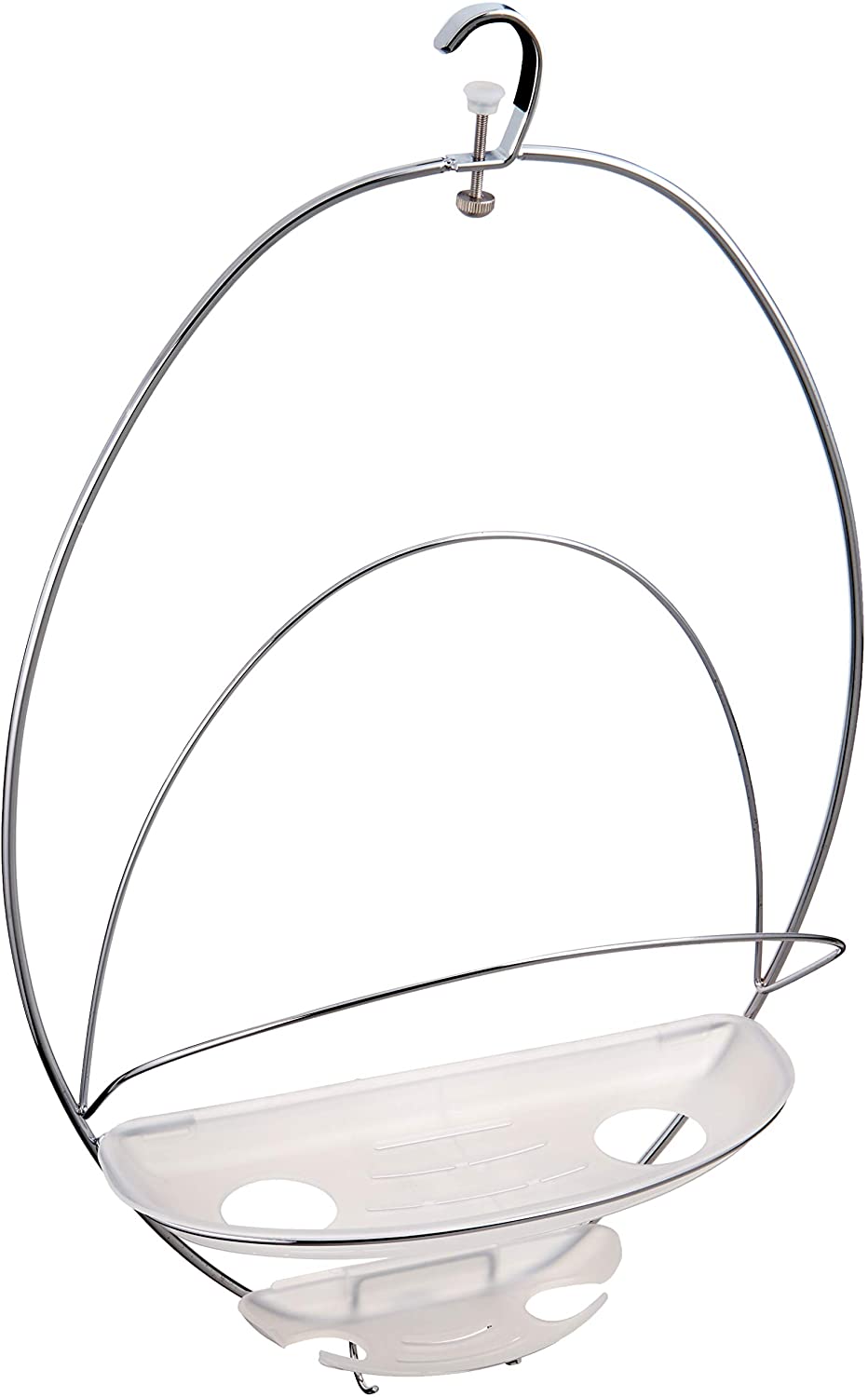 If you’re going to put a caddy over the shower door you might as well go big. The iDesign Metalo Over the Door Shower Caddy offers two big baskets and two small baskets to handle all your extra shower products with room to spare. Suction cups will help secure the caddy to the door so it doesn’t move and that’s for the best if you want to use the rung at the bottom to hold a towel. On the downsides, it’s not made of stainless steel, so we do expect it to rust, and over-the-door shower caddies plain just don’t work well for many shower setups. But that’s not specific to the iDesign caddy, so if you’re looking for a ton of extra storage in your shower in a place you’ll never be standing, the iDesign caddy is the best shower caddy. 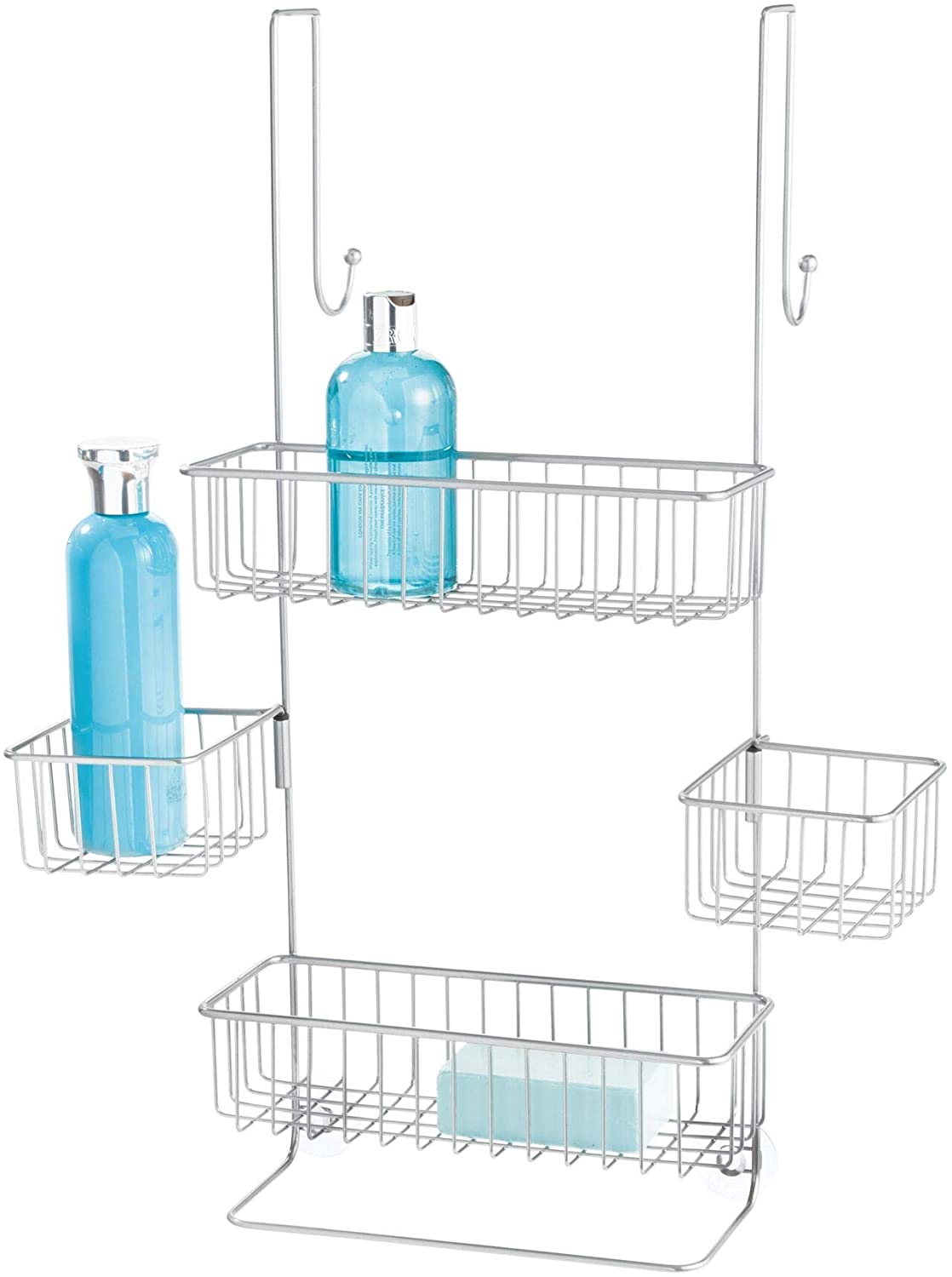 It’s never a bad idea to have a mesh, collapsible, foldable shower caddy for the occasional trip, gym shower or for group living situations. Sure, these kinds of shower caddies might be staples for college dorms but that’s because they carry a bunch of shower products, dry easily and store easily.

The Attmu Mesh Shower Caddy pack of two should easily meet any of your caddy needs in those situations. Two sturdy handles make for easy carrying and you get eight side pockets and a spacious main basket for whatever you need to bring with you.

Overall if you’re looking for a basic caddy that will see you through a non-home shower situation, the Attmu Mesh Shower Caddy is the best shower caddy for you. 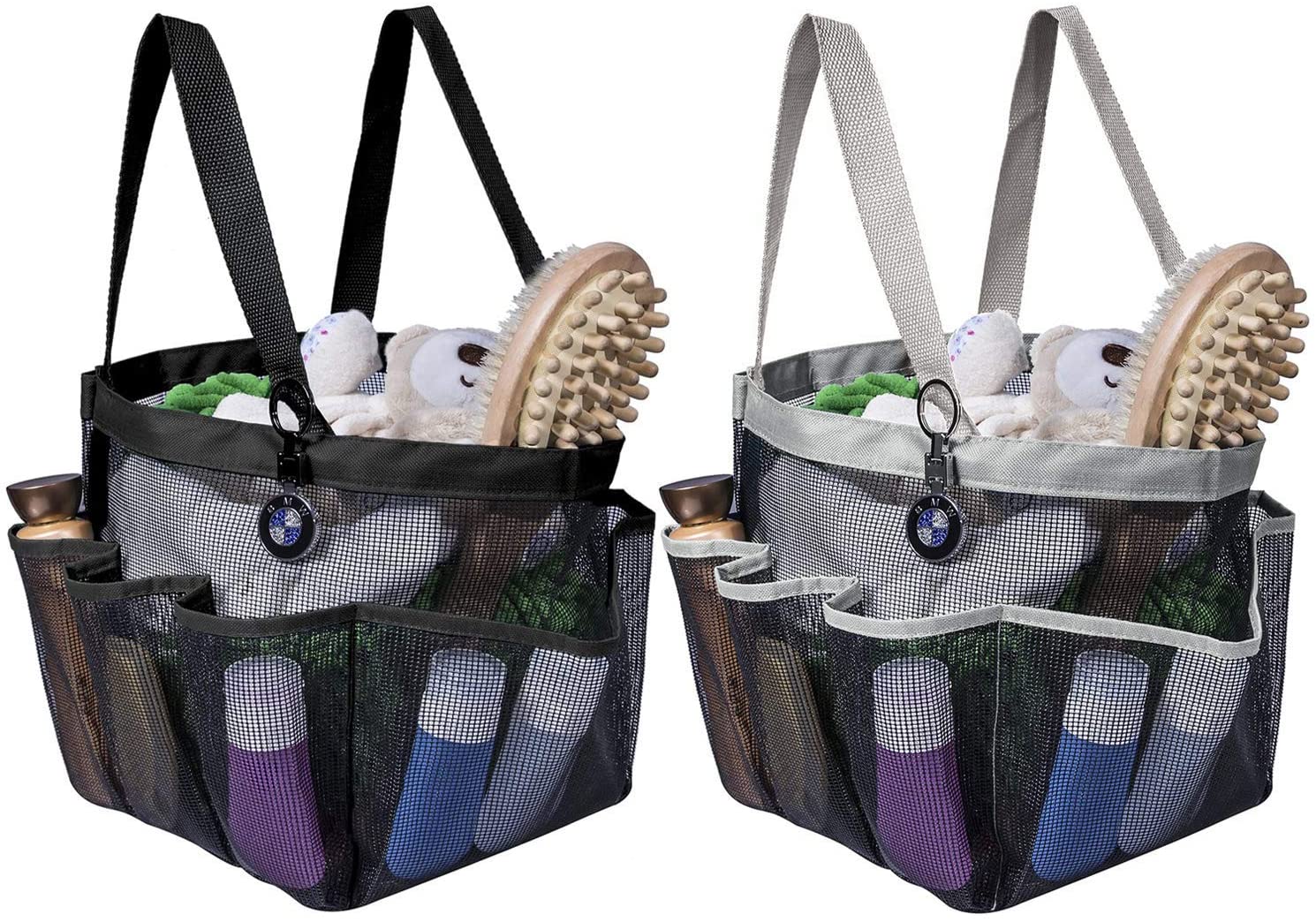 This simple shower caddy shelf is made of rustproof stainless steel and comes in three different colors, including black. It attaches to the wall via adhesives and hooks so it requires no drilling or other invasive measures, and it’s easy to remove from the wall if/when you need to clean it. It’s made of durable material and is only a 2-tier shelf so it won’t take up too much space and is perfect for smaller bathrooms and showers. 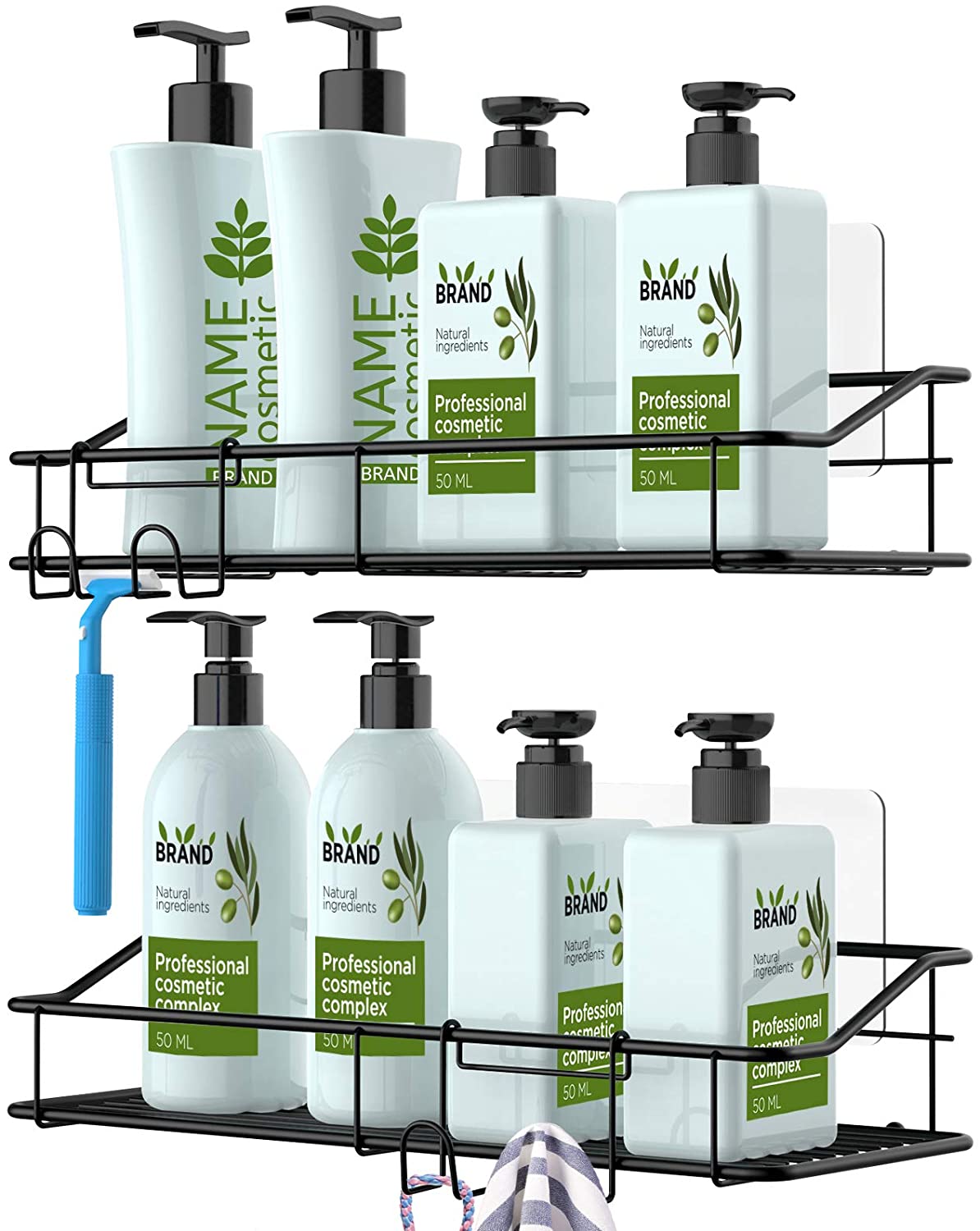 This shower caddy from Orimade comes with sturdy, tall shelves that’ll keep all your products secure and mounts on the wall via adhesives so there’s no drilling required. The installation is easy, and the shelf comes with extra adhesives in case you need them. The shelf is made of rustproof stainless steel and has five hooks across the shelves so you can hang washcloths, loofahs or anything else you want to hang to dry. Both shelves have a large capacity for holding many products at once, and it comes in both silver and black. 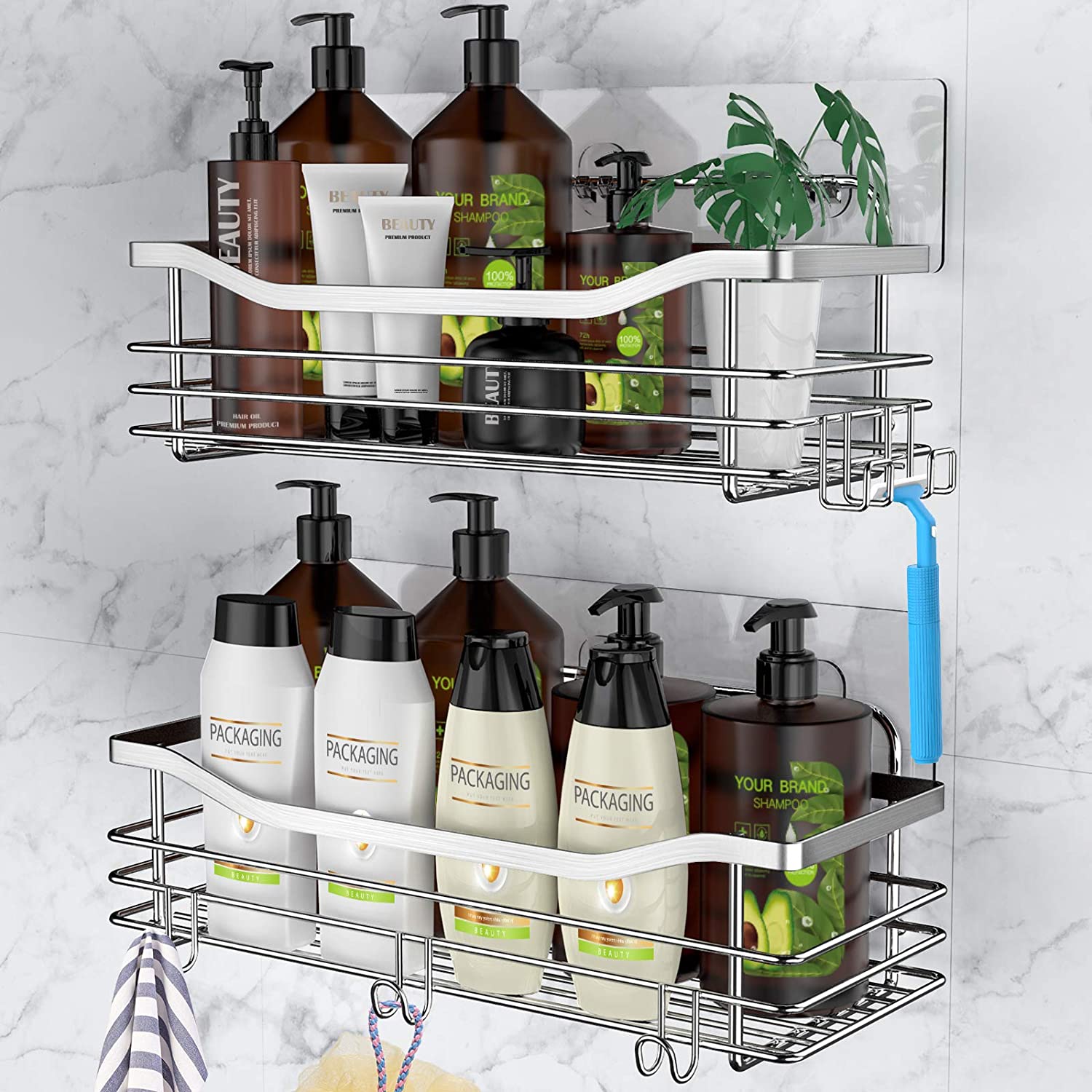 Fitted Sheet Not So Fitted Anymore? Get These Sheet Fasteners